(The Cricketer – July 11, 2022) Speaking at the launch of the Sir Garry Sobers Foundation, dedicated to supporting young cricketers, he discussed his passion for junior cricket and England’s astonishing Test victories 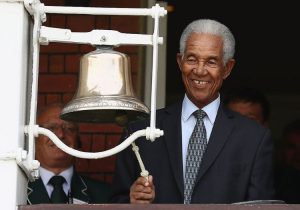 Huw Turbervill | 12/07/2022 at 13:00
Sir Garry Sobers admits that he watched England’s Test victories this summer with a sense of astonishment.

England under their new captain Ben Stokes and coach Brendon McCullum played a belligerent brand of cricket to defeat New Zealand 3-0, and take the rearranged one-off Test against India.

Speaking at the launch of a foundation named after him, dedicated to supporting young cricketers, he admitted: “I can’t believe what I was seeing in the Tests. Flashing bats and people trying to hit fours and sixes every ball. It’s good from the spectator’s point of view – rather than dull and boring cricket, pushing it back down the wicket. I do worry about the technical side of the game, though, that it’s suffering.

“That’s why I enjoy watching Joe Root, he’s a hell of a good player. I’m also a big fan of James Anderson. He’s getting better and quicker. He runs in like he’s just 20 years of age. He’s 40 soon – I can’t believe it!”

The Sir Garry Sobers Foundation is looking to raise £50m to help talented youngsters. It will have five hubs, in the UK, West Indies, India, Australia and South Africa. The initiative has been launched with the support of Bravia Capital, a private investment firm based in New York, established in 2000 by Bharat Bhise. 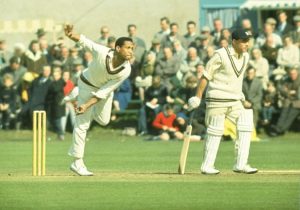 “It’s wonderful to be here – it feels that what you have done in life has been a success, and people have liked and loved you because of that,” said Sobers. “I’d like to feel it was not just what I did on the field, but how I carried myself off it, and what I did for my family and country. Hopefully this can help others follow my path.”

Now 85, he recalls the time when he felt he was accepted by the West Indies side. He was 19, and doubting himself. “I was called an imposter. I’d just arrived, and was looking around at the conditions and thinking what am I doing here? But I took this catch at second slip, and I could’t believe it. Learie Constantine saw it and said: ‘It’s impossible!’

“Cricket has given me everything. My father died when I was young, and although I had family around they all had to go to work. I started to play at a young age. I had to do this so I could help my country. It proved successful.

“Junior cricket development has always been close to my heart. After my retirement, I spent seven years in Australia and elsewhere coaching, and I loved it just as much as playing. It was so rewarding and took me back to my ‘boy days’, as we say in Barbados.”

Sobers enjoyed a 20-year international career for West Indies, between 1954 and 1974. In 1975 he was knighted for his services to cricket.

Allan Lamb, Brian Lara, Joel Garner, Mike Procter, Gordon Greenidge, John Lever, Farokh Engineer and Mark Nicholas joined him at the launch in County Hall on the banks of the Thames in London.

With thanks to the Sir Garry Sobers Foundation, changing the life trajectories of young people all over the world. For more visit: https://sirgarrysobers.org