New York, New York–(Newsfile Corp. – May 11, 2022) – Bravia Capital Partners NV, Inc., today announced that Barbadian national hero and cricket’s greatest all-round player, Sir Garry Sobers, has joined its board of advisors. Sobers, who has been inducted in the International Cricket Council Hall of Fame for his services in cricket, brings his decades worth of sports excellence to Bravia Capital’s advisory board. 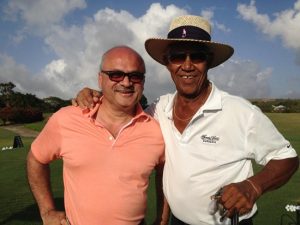 “It’s an honor to be joining the board of advisors of Bravia Capital. I look forward to working with Bharat and his philanthropic team especially on transmitting the values of the game to future generations,” remarked Sobers. Bravia Capital is a privately held, single-family office focused for three decades on investments in transportation and logistics businesses. Since the COVID-era, Bravia Capital’s focus is now geared towards companies with environmental, social and governance mandates; together with this it is focused on philanthropy and public service, especially in areas such as U.S. domestic financial security, gender parity and anti-racial discrimination.

“I have known and respected Sir Garry for many years and have been a huge fan since my childhood. In the past decade when I have been privileged to spend time with Sir Garry, he has given me extraordinary insights into humility, leadership, teamwork, common sense, decision making and many other traits of character,” said Bharat Bhise, CEO of Bravia Capital. “I look forward to working with Sir Garry on keeping his legacy alive for future generations.” About Sir Garfield Sobers

Sir Garfield Sobers was born in Bridgetown, Barbados, and in 1953 at the age of 16 made his debut for the Barbados cricket team, followed by his debut for the West Indies in 1954. In the years that followed, Sobers demonstrated excellence as a spin and subsequently pace bowler. In addition, he was the greatest batsman of his generation at all levels of the batting order. Sir Garfield was acknowledged as the world’s greatest fielder setting records in the sport of cricket. He was made captain of the West Indies in 1965, a role which he would hold until his retirement in 1972. He would also captain the Rest of the World XI cricket team during their 1970 tour of England. Mr. Sobers’ phenomenal cricketing record and accomplishments have been attributed to serving as a unifying force amongst Barbadians and creating a way for the country to gain global recognition. In 1998, by an act of parliament, Sobers was named as one of the ten National Heroes of Barbados.

To view the source version of this press release, please visit https://www.newsfilecorp.com/release/123574