Piaggio Aero has announced the first major order for its Avanti EVO, the prototype of which is making its airshow debut here at Farnborough (Farnborough Airshow News, Monday, July 14, page 82). Hong Kong-based Bravia Capital has signed an order for 10 aircraft with options for another 40. Deliveries are planned to begin in the first quarter of next year. The aircraft will operate in the U.S., primarily in what Bravia CEO Bharat Bhise described as the “up to three hour” market sector. 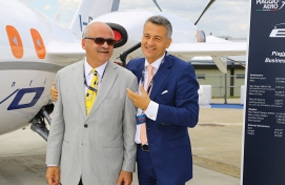 Although Piaggio Aero had been flight-testing the Avanti EVO since the spring of 2013, the company formally launched the new version of the twin-turboprop pusher at the EBACE show in May. Three orders were already in the bag. The first aircraft was bought by an existing Avanti II customer in India, while the third is to be delivered to a U.S. customer.

Regarding certification of the EVO, “The major design changes will be certified with EASA and then, if necessary, validated by FAA under the bilateral agreement, with the exception of community noise reduction that will be certified directly and separately by both authorities,” reported Carlo Logli, CEO of Piaggio Aero. Modifications were submitted for certification as “Design Changes” to the current type. Minor changes will be certified by Piaggio under its “Design Organization” privileges. Piaggio Aero is hopeful of achieving FAA approval in time for the aircraft to make its debut at the EAA Oshkosh show in October.

In the meantime, Piaggio Aero has chosen Farnborough to hand over the first of two extended-range Avanti IIs to launch customer SR Jet, part of the Beijing-based Sparkle Roll Aviation. This version received EASA certification in June, and features a permanent additional tank in the fuselage at the internal capacity cost of just half a closet in the toilet. Fuel capacity increased from 2,826 to 3,226 pounds, resulting in a range increase from 1,470 to 1,720 nm with four passengers and IFR-FAA reserves. The extended-range option is applicable to the new Avanti EVO as well.

Also this week, Piaggio has announced that ConnectJets has been appointed to serve as the exclusive dealer for the Avanti in the UK, Channel Islands, Isle of Man and Ireland. Details of the UK’s first authorized service center are to be revealed soon.

Since buying into Piaggio Aero in 2006, Mubadala has re-energized the Avanti product range through investment. In May, the Abu Dhabi company increased its stake to 98.05 percent. Starting in September, all manufacturing and assembly of the Avanti aircraft will be concentrated at the Piaggio Aero factory at Villanova d’Albenga.

Piaggio Aero has also been developing new military models, such as the P1HH HammerHead unmanned ISR platform on display here at Farnborough, and a manned, multirole patrol aircraft (MPA), which is being co-developed with Abu Dhabi Autonomous Systems Investment (ADASI). A proof-of-concept P1HH first flew last November, and a full prototype is due to fly imminently.

To equip these versions Piaggio chose “the best suppliers in their specific sectors,” said Logli. Saab was selected as the MPA systems supplier after an international evaluation process, and Selex got the nod for the P1HH’s remote flight control and navigation systems, as well as the SkySTAR mission system.

Both aircraft take advantage of development synergies, Logli said, such as the extended wing developed for the MPA that was later installed on the HammerHead UAS. The wing is one element in advancing the manned aircraft as a surveillance platform.

Logli added, “For coastal, maritime and offshore security missions, the MPA will fly at 41,000 feet with a range of 3,300 nautical miles [more than 10 hours of endurance] at a cruise speed of 350 knots. It will feature a high performance search radar and EO/IR sensors suite integrated into a mission management system. The first version, dedicated to maritime patrol, is currently in its development phase and we expect the first flight of the prototype in 2015.”

Pillars for a Successful Global Business